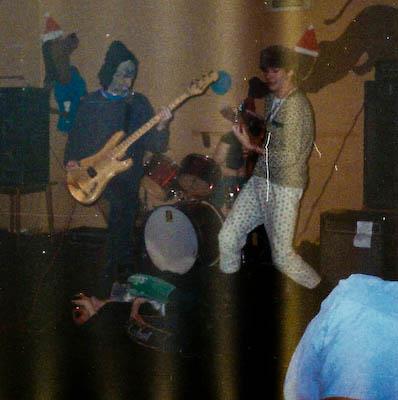 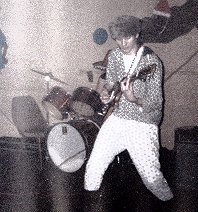 Neil got this gig by chance when he was talking to the promoter Eddie Green in a Denbigh Record shop & learnt that a band called Noise, What Noise? had pulled out of the slot.  Neil knowing the publicity of 4Q was really working against him booked the band in as Johnny Rawhide & The Cowhorns to ensure the show went ahead.
At 11.30pm to theme tune from Rocky III the DJ introduced the band & 4Q strutted out of the dressing room door, Wayne in his mask, Matt with the mexican hat & Neil in his mis-matched pyjamas, Davy Crockett hat & jackboots. After blasting through the opening 3 songs Neil’s guitar started screeching for some reason & the DJ put music on while it was sorted out, the problem was a dodgy lead; ‘We should’ve called ourselves the Dodgy Leads,’ muttered Wayne.  The promoter told the band they could do 3 more songs as he thought the crowd might start getting ugly, but after those 3 songs the cheers were vociferous & 4Q responded with an encore of  VD & 1984, but they hadn’t had enough & a 2nd encore of God Save The Queen with an explosive ending ensured everyone was on their feet cheering.
After receiving payment Neil told the promoter the true identity of the band & he admitted that 4Q would not have played if he’d known that beforehand, but said he’d like to put the band on again.

DENBIGH promoter Eddie Green took one of his biggest gambles last week when he put on a band in Scooby Doo's nightclub under the dubious name Johnny Rawhide & The Cowhorns.
The group actually turned out to be manic rockers 4Q.
Letting this controversial band loose on the unsuspecting Denbigh public could have worked either way but despite the initial jeers the evening was a success.
The show threatened to be a disaster when Neil's guitar broke after the second song but the repairs were made & the band's performance went from strength to strength.
They battered out numbers like I Hate TV, Skool Is A Drag & a marvellous rendition of God Save The Queen.
Although the band were battling against a crowd who knew little about them they all performed admirably, everyone giving their best performance.
Halfway through the set vocalist Cumi thanked Eddie, of the Ferryman Agency, for giving them the chance to play in Denbigh.
'There aren't many gigs in Denbigh but this man is doing his best to help bands out,' he said.
Eddie said after the gig that if another concert could be arranged which would be well publicised & attract the right sort of people he would put them on again.