Fflaps in session for John Peel 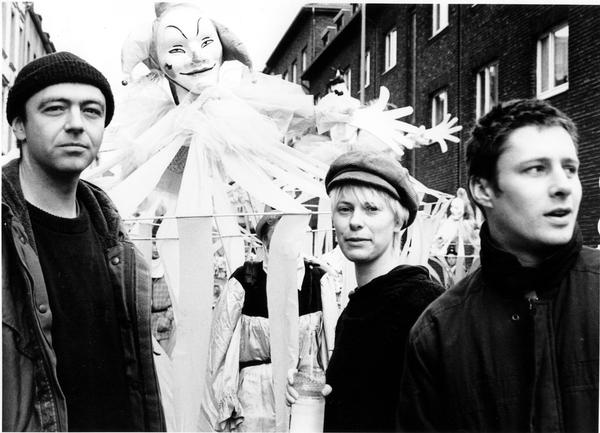 The Anhrefn connection and the left of left-field sound that Fflaps emit caught the ear of John Peel who let them record two sessions for his show. ‘John Walters [Peel’s producer] rang me up,’ explains Ann. ‘He didn’t mention the language, but that Peel really liked the EP Anhrefn [Records] put out. We were a little naughty because we did a cover of Peel’s favourite Slits song… it worked a treat.’

Alan adds, ‘[It] was of course a dream come true, although the actual recording of them was a nightmare due to the patronising attitudes of BBC producers. The session was produced by the notoriously cantankerous ex-Mott the Hoople drummer Dale Griffin, who managed to render Jonny’s ramshackle drum kit even more unplayable than it already was with some heavy handed ‘adjustments’.’

Rather than reprising any of the songs from that EP, they chose to present four unreleased tracks that would appear on their debut LP ‘Amhersain‘ later that year.
That first session was aired a mere eight months after their debut gig in Colwyn Bay. On air they thrashed out four songs in what would become typical dischordial fashion that reminded me of The Membranes, although Alan stated they weren’t an immediate influence, ‘Not initially, but getting to know them and playing a couple of gigs with them, I think some aspects of their approach inevitably seeped through. Equally influential at the time were groups like The Nightingales, Nomeansno and Husker Du, amongst others.’

When questioned whether they as a band wrote a nice song then deliberately wrecked it, Ann’s take on it was, ‘No, it’s a matter of opinion whether people think we ruin songs or not. This Welsh attitude of not trying to understand that music is a lot of different things is pretty annoying.’