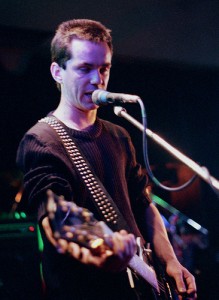 (from 4Q Diaries) – A bodge of an evening, Cumi refused to come because he had the ‘flu, so Neil had to double up & sing as well. The promoters were caught fly posting so advertising was at a bare minimum & the PA was shite.
Cumi’s absence gave Neil & Wayne the opportunity to rib him behind his back…

NEIL: Good evening, were called 4Q & our vocalist isn’t here as he’s got the flu.
WAYNE: He hasn’t really
NEIL: No, he went home so his mum & dad said he couldn’t come to the gig & they’ve stopped his pocket money.

It was one of those bad gigs, a bit like the Comic Strip’s Bad News tour, but with no dog in the audience. The playing wasn’t that bad actually, it was the PA that let all the bands down that night. As 4Q finished the last song Jerks the crowd cheered & called for ‘Less, less’ as opposed to ‘more more’, so Neil walked back on stage dropped his pants, bent over & stuck 2 fingers up at them. It was one of those evenings.
4Q Set; Nein Werk, Video Party, PMT, Skool Is A Drag, Not Now Not Never, VD, I Hate TV, Jerks