This could become a regular thing; 2 excellent 4Q gigs on the run. 4Q had quickly adopted the knack of finding venues who would be prepared to put them on or, as in most cases, were unaware what they were letting themselves in for. You’ll notice if you look down the list of gigs that there were not many venues who actually (knowingly) put 4Q on a 2nd time. The Grand Hotel were another one of those unfortunate venues.

Half the audience were 15-16 year old girls (a “schooly fest” as Matt described it rubbing his hands), the other half were other locals, followers from Colwyn Bay & Bangor, & a minibus full of the VD Crew.

Black Listed playing their debut gig went down pretty well, they knew 4Q as they used to support them under the Tarantulas guise.

Matt & Cumi got on the stage while Neil & Wayne prepared themselves in the bogs, Wayne wore an “ugly face” mask (although no one noticed the difference) & Neil dressed in pyjamas. The pair legged it through the crowd, onto the stage & 4Q hammered into Nein Werk / Video Party going really over the top with enthusiastic gymnastics (!). The song finished, the crowd cheered and Cumi introduced PMT dedicating it to the females in the audience, but as he suggested; ‘It looks like most of you aren’t old enough to experience PMT.’

By now the backing vocal microphone had been attacked by the onset gremlins & was swiftly booted away. Beer & gob were flying in all directions. Twisted Tabloids was followed by the 1st public performance of Skool Is A Drag, a song written by Neil in school at the age of 12. By now people had got up & started throwing each other all over the place. Dope Fiend was dedicated to Matt who got up from behind his kit & spat in Cumi’s face. Cumi not learning too quickly dedicated the next song to Wayne for sucking a donkey’s dick, Wayne gave the singer a swift kick in the shins. I Hate TV was given it’s 1st public airing this evening having been completely re-written. You knew it was going to be a good night when Neil got the guitar solo to God Save The Queen spot on. An encore was inevitable due the crowd chanting; ‘We want VD, we want VD.’ 4Q of course obliged. 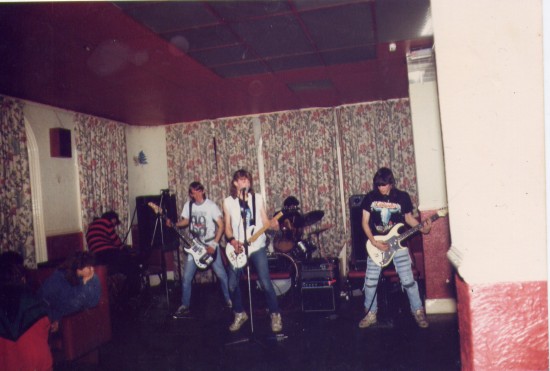 Black Listed making their live debut at The Grand