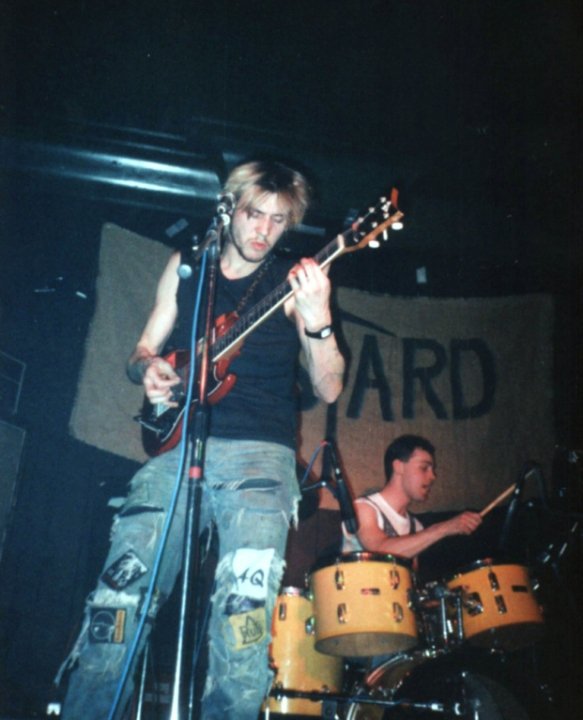 (from This Patch of Land) – After Cumi’s full debut supporting Destroy Babylon, 4Q then headed for Leeds Duchess of York to play with space-rock outfit Bastard, a group that would have a profound effect on myself and eventually have influence over my musical direction in Sons of Selina. Bastard’s bassist, Ron Tree would eventually join Hawkwind and meet up again with Cumi and me some twelve years later when the two bands were on the same bill. A cassette recording of the Duchess gig was released in the form of ‘4Q 1, Leeds 0’ and received a meek response from the press; Kurt Jacobs of the North Wales Weekly News said, ‘Although you could not call 4Q’s fuzzy guitar and frenzied drums melodic I like the tape, though it will not appeal to non-punks. Best songs are Nein Werk, We Want You and Jerks (dedicated to Su Pollard). The tape has a lot of self¬ knocking humour, although the frequent quips often get on your nerves.’
Chris White of The Pioneer wasn’t that impressed, ‘Musically the band have little to offer, but full marks for their determination and enthusiasm.’ 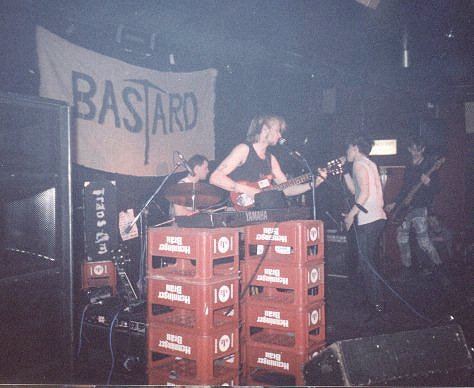 (from Crud Diaries) – 4Q take their 1st venture over the border, a real PA with sound engineer! They had the same at Corwen but were too drunk to remember it. They hired a Ford Escort for the journey & after stopping to vandalize a motorway service station & nearly run someone over by jumping a red light, the four boys hit the Duchess of York. They all had a kebab before the soundcheck from the takeaway next door & 15 minutes before they were due to go on all 4 of them queued up to use the toilet, thankfully Wayne had earlier bought a copy of the NME as there wasn’t any bog roll. This was a surprise, they almost sounded like musicians! Even if the bass played something different to the guitar & the latter was out of tune. The sound engineer did a good job & added effects at choice moments.

Cumi relished the moment & his backing didn’t let him down, Paul even went walk-about playing his cymbals while running around the kit. The usual sheep jokes were thrown at the band & 4Q responded with appropriate abuse. This gig was a yard stick as far as 4Q performances were concerned, they were trying to keep the chaos but take away the violent aggression.

BASTARD were fantastic, Cumi & Neil still talk about them now- 10 years on. And how they never landed a record deal is a total mystery. ‘I suppose you could say they were like the Sons of Selina.’ said Neil. ‘But when SOS recorded those early songs we never had Bastard in our minds although it wouldn’t have been a bad thing if we did.’

In front of 400 people 4Q made their West Yorkshire debut & not only astonished the crowd but also amazed themselves by demonstrating that not only can they perform a manic set, but they can also play a selection of extremely tight songs.  This is about the 10th time I've seen 4Q & is by far the best.  New singer, Cumi Pants clearly mouths the words as the band plough through their songs as fast as a vindaloo through a pensioner.
After being coaxed into playing a 2 song encore 4Q, for me are the band of the late 80's, but there again, I'm biased.
Now, Bastard; I expected a thrash band, but instead I was astounded by what can only be described as a mixture of heavy Hawkwind & punk.  A highly competant collection of songs & putting these 2 bands on the same evening worked out to be a very interesting & entertaining contrast.