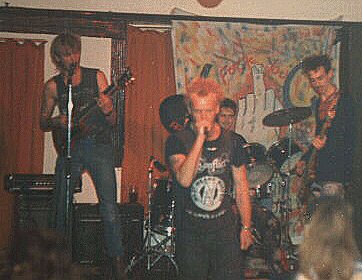 4Q had found a new singer in the form of 26 year veteran punk rocker BUDGIE from Llandudno, who at the time seemed an ideal replacement for Edi. After all Budgie was a notoriously well known character who had once been outlawed from his home town for being a public nuisance (pulling moonies in the street etc.). He spent a lot of time living in the London squats & jumped at the chance of joining the band.

Three weeks of advertising all over North Wales coupled with all the publicity from the previous performance, 4Q descended on the seaside resort for what was only their 6th gig. ANAKONDA, playing their final gig were going to change their name to THE KINDRED for some reason before splitting up. They played their usual set of abysmal cover versions apart from an alright-ish self penned song called You Shit which did turn a few heads.

Between the 2 bands Neil got up on stage with Anakonda’s guitarist, Nic & their drummer Huw to do a version of Paranoid & an excellent version of The Cramps‘ Can Your Pussy Do The Dog, this actual recording is available on The Very Breast Of 4Q cassette & is worth buying just for this song alone. 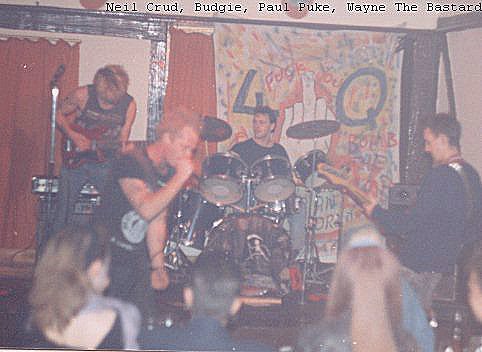 Budgie simply wasn’t ready for this gig, he didn’t know the words & was more of a bass player than a singer – and it showed. Regardless of this the audience took the show in their stride & started throwing pints of beer at the band. Soon realising that this was expensive some started fetching water from the toilets & hurling it at them.

‘I couldn’t see the crowd properly as the stage lights shone right in my face, but even though I was extremely drunk I remember every time I looked up a pint of water would hit me in the face,’ remembers Neil.

‘The stage was awash with liquid and I expected a massive electric shock at any time.’

The show, a dismal performance with virtually no structure ended in a mess of feedback & drums being kicked everywhere. The landlord of The Bee Hotel tried to get money off 4Q for the loss of ‘nearly 50 beer glasses’ (a slight exaggeration on his behalf) which were left smashed all over the floor. Marc Mucus who briefly played at the Bangor Albion gig walked out saying he’ll never watch 4Q again. Another spectator, Aaron Broster said the band made the Sex Pistols look like the Philharmonic Orchestra. 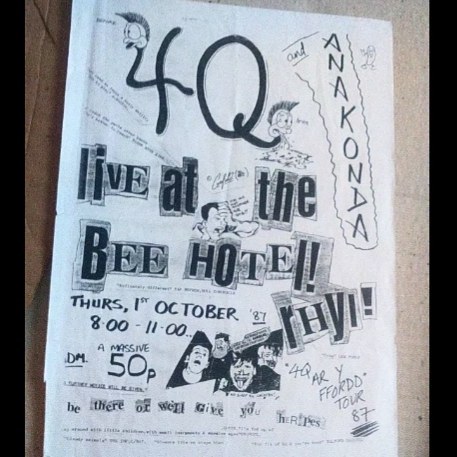