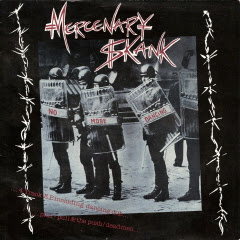 Rhyl’s Mercenary Skank release their first record, No More Dancing 12″ EP (No More Dancing / The Pull and The Push / Down Among The Deadmen / Dancing Dub) on indie label Criminal Damage. The material was typical of the guitar bands of the early eighties, and although the vocal delivery was quite thin and weak, Scratch’s good looks and stage presence earned Mercenary Skank plenty of plaudits.

Like many bands, the pressures of a debut release began to show and divisions within M.Skank widened, with bassist Graham Bevins and guitarist Andrew Tunnicliffe never seeing eye to eye.

On the subject of all the press attention, Bevins said, ‘It went to Scratch and Tunkie’s heads in the end. I knew things weren’t well when I turned up at Grannies Studios to find Scratch pinned up against the wall by Mark. That was the beginning of the end.’

Tunnicliffe says, ‘We discussed getting reliable musicians all through 1984 but really decided on the morning of the first recordings for the No More Dancing EP. I arrived to find some argument had resulted in Scratch hitting Mark and Graham was moaning as usual and I found Scratch at a nearby café. That was the point at which we decided but we weren’t going to waste any more time with them. Should have done it a year previously.
‘The record was released on 19th October 1984, we told the others we no longer wanted to work with them exactly three weeks later. We’d already lined up a new rhythm section and began rehearsing within days.’

It certainly was the end for Graham Bevins, Mike Crees and Mark Jordan. During those three weeks they had heard rumours of the band’s demise from outside sources and Scratch announced that Mercenary Skank had come to its natural conclusion; he really meant that he and Tunkie were carrying on without the other three. Scratch and Tunkie recruited new musicians, including Dogs D’Amour’s bassist.