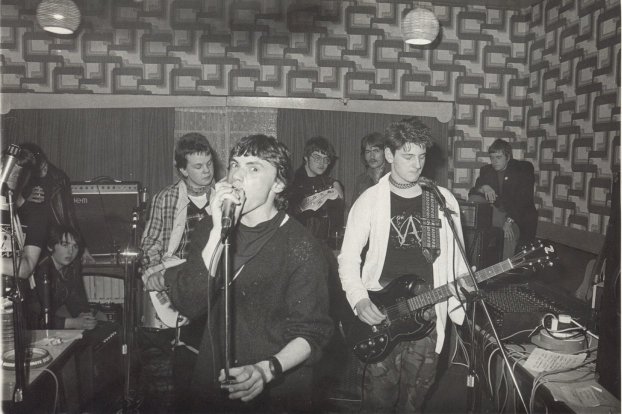 If you are one of those people who have thought, quite correctly for a longtime, that Rhyl has no music scene, don’t despair – despite North Wales’ deep rooted acute musical apathy, some new groups are alive & reasonably well. Over the last few months a staggering awareness of the lack of any musical scene has grown & encouragingly there seems to be plenty of enthusiasm to set this right. New bands have felt safe to announce their formation & push for recognition. The climax of this activity (mostly by The Vaj) was the gig on Sat 17th at the North Wales Inn. 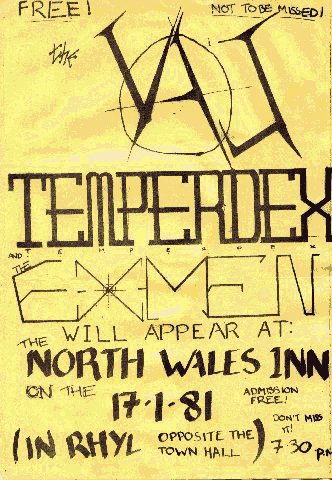 New bands they maybe, but their style & their music was certainly not original. If you believe in punk for punk’s sake, you probably had a wonderful evening; in fact you were probably one of the dozen or so enthusiastic fans madly pogoing at the front (most of whom looked as though they were only 12 or so in ’77, so who can blame them for having their fling now?). If so, you proabably didn’t notice the frigid stupor of the rest of the audience, which was such a shame because most of the people had gone along with the intention of liking the bands.

I believe Temperdex was quite good, but faced with a totally unreceptive audience who just looked bored & fiddled with their Vaj badges. I didn’t hear much because I arrived late & was then at the bar.

The Physical 4 (Thought) were poor, although in retrospect their general sound was not too awful, their drummer really summed it up when he said: ‘We practised 10 hours for this fucking gig & if that’s all you can give us, you can fuck off.’ Though, if you don’t give anything to an audience you can hardly expect anything from them.

They were followed by The Vaj (pic above) whose general sound was much worse. I shouldn’t think they’ll be too upset by saying this as the fairy story has come partly true for them; buy an instrument, take it along to a friend’s house where you’ve arranged a rehearsal with a couple of chums. With an enthusiastic manager such as Muss, a month or so later you could be pushing your way through the crowds in a local oub, wearing a personalised t-shirt or hearing ‘We are, we are The Vaj’ by 3rd & 4th years in your school – schoolboy heroes. Musically I thought they had little to offer except the ingenuity of playing bass on a normal guitar & the advantage of a very good drummer, a great deal of enthusiasm & a lot of friends in the audience.

The VOTS (pic below) outclassed the other 2 punk bands. What they did they did quite well, but really – what is the point of rehearsing a style that has been outgrown? I won’t raise the hackles of every punk fan by saying ‘Punk is Dead’, but it no longer the force it was. For instance swearing at the audience no longer shocks – simply because it’s all been done before, & done better – it’s stereotyped & stale.

Jap Connection are fashionable, they are of course a little late to join the competition between bands using a mixture of synthesised & traditional styles, but it seems more possible that they will use new ideas to develop an individual sound for themselves & change if needed – they are not stuck in a time warp like the others.

Finally its congratulations all round to everyone who took part. The mere fact that a gig of this sort was organised & attended by a lot of young people in such a musically stagnant town augurs well for the future. It may generate more interest for more frequent events of this kind & build up a healthy environment in which new bands with new ideas can prosper. I hope so. 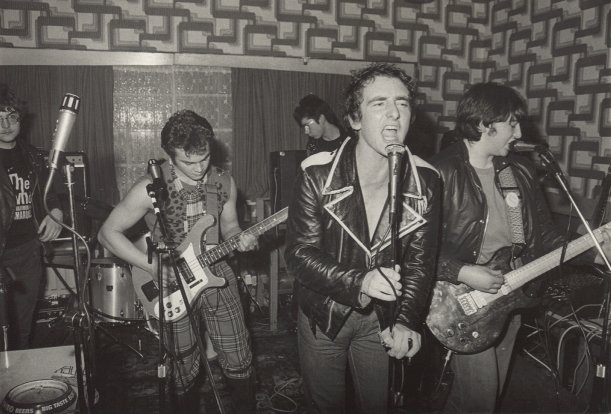