Full recording in excellent quality of the legend that is Bob Marley at Deeside Leisure Centre, playing one of his last ever concerts.. 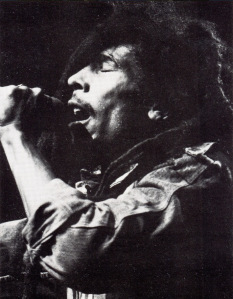 If there’s one thing that stands out about a Bob Marley concert, it’s the vast repertoire of top material that he and his band can produce.

Although there were a couple of songs that failed to raise the roof at the Deeside Leisure Centre during Marley’s recent performance, the audience were kept cheering, clapping and chanting for 90 per cent of the time as one Marley standard after another boomed from the stage.

The concert which drew a vast crowd of around 4, 500 people, opened with Marley’s band Tuff Gong Uprising backing the I Three’s, Marley’s own backing singers. Though they received loud applause, it was nothing to compare with the roar that greeted the man himself, dreadlocks flying, pinned by a white spotlight.

At this point, rather aptly, the band and Marley simply got up and walked off-stage. No had the slightest intention of letting them go, and 4, 500 voices shouting for more put the message across (as if Marley wasn’t intending to come back anyway). The set opened with Natural Mystic, instantly recognisable, before Marley went on to play some of his lesser-known stuff. For the first hour or so, things went well enough, but then came the opening chords of Jammin’, and the whole place nearly took off. The concert simply lifted to a different plane. And that was followed by Exodus.

The second part of the set included classics like Natty Dread, No Woman No Cry, I Shot The Sheriff, all played with little or no chat in between.

The music was tight without being strictly bound to the album originals, proving if nothing else that Marley is a professional and that his musicians are men of imagination and flexibility, unlike some bands who use tours simple to put across, note for note, the stuff they put on the albums they want to promote.

Last number was a loose version of Get Up Stand Up with the obligatory singalong in the middle of it. Then it was spots off, house light on.

Seventeen on tour Terminal – Hold On