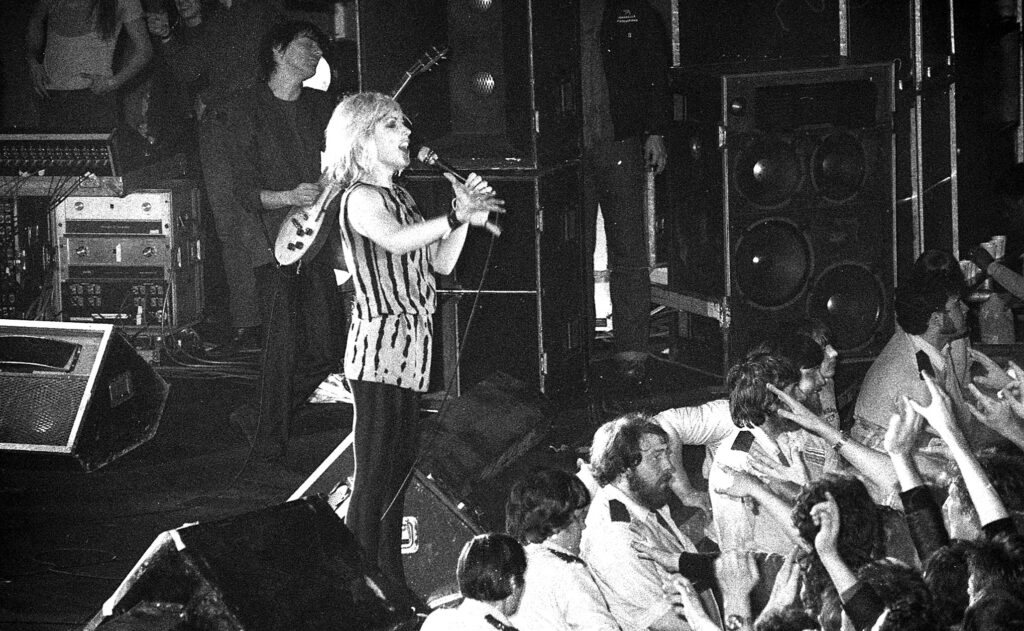 This was the second gig Blondie played at Deeside Leisure Centre in two weeks, having played a set laden with sound problems here on 6th January (see pics). Tonight there were no such issues.

…I eventually sold my copy of Parallel Lines for £2.50 to a girl in my class, the transaction taking place during morning break in the relatively discreet setting of a tennis court on the school sports field. I knew at the time that I might live to regret the sale but at such an age, what you know in you head to be right or wrong is all-too-often overridden by the greater need to conform, and so it was here. Thankfully, the following Christmas my younger sister got Eat to the Beat as a present and the year after that, Autoamerican, meaning I was still able to get my Blondie fix but without the risk of compromising my credibility. But anyway, by the time Blondie came to play the Deeside Leisure Centre, close to my hometown in the winter of 1980, I’d already grown sufficiently confident in my musical choices as to no longer give so much weight to the opinions of others. And, in spite of the fact that I was now listening to the likes of PIL, Joy Division and Gang of Four, I was not going to pass up the chance to see Blondie up close and, erm… in the flesh. 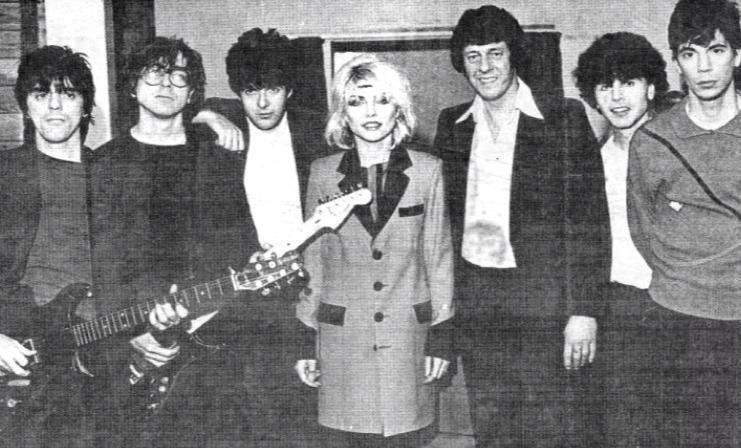 (pic above taken backstage)
Now, Deeside Leisure Centre may no longer feature on the musical map of the United Kingdom and its rather prosaic name doesn’t quite fire the rock and roll imagination in quite the same way as mention of say, the Roundhouse, the Hammersmith Palais or even Glasgow Barrowland does. However, back in 1979 some bright spark at Alyn and Deeside District Council happened upon on the idea that by way of the simple act of laying some insulated carpet over the centre’s ice rink, it was possible to transform it instantaneously into one of Britain’s biggest concert halls.4 As a result of this brainwave, an economically depressed, unemployment blackspot in North Wales briefly became an important tour destination for some of the biggest names in rock and pop, including: The Jam, The Police, Gary Numan, Bob Marley and the Wailers, Kiss, The Clash, Adam and the Ants, Ian Dury and the Blockheads, Status Quo and erm… Showaddywaddy.

What’s more, visiting bands often commentated on the enthusiasm of the Deeside crowd, including Debbie Harry herself, who in the book Making Tracks: The Rise of Blondie, comments: ‘We did two shows at a place called the Deeside Leisure Centre outside Liverpool, in a hockey-sized skating rink. It was packed with five thousand people and the audience sang along with each song. Those two shows were the best gigs of the tour.’ 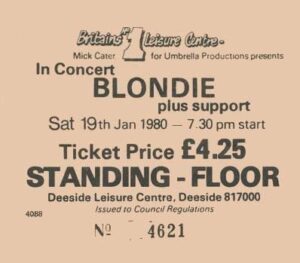 But the plain truth was, that as well as being one of the largest venues in the country, Deeside Leisure Centre was also, understandably, by far the coldest. As such, the warm and exuberant welcome afforded to the many varied acts that came to play was generated in part by the practical need of audience members to stave off hypothermia by jumping up and down and waving their arms about frantically. And having done so, by the end of a concert they would often find themselves splashing around in an inch or so of dirty water that had melted from the ice and seeped through the joins of the carpet. Regardless, though the two shows that Blondie performed at the venue may have been  memorable for Debbie, due to an unfortunate incident that occurred during the interval between the support band, Whirlwind, and Blondie, the show that I attended on Saturday 19 January 1980 5  is, for me, memorable for the wrong reasons.

My friend Rob G and I had used the break in proceedings to try and get closer to the stage. And we’d just managed to find a spec with good visibility next to a couple of girls who were of a similar age to us, when one of them suddenly span around and fixed me a glassy-eyed stare before swiftly depositing a full-on liquid burp upon me. Immediately, from the distinctive odour it was clear that she’d been drinking cider and had, perhaps, been made queasy through being jostled around amid so large a mass of people. 6 And though I had seen it coming my way – in cinematic slo-mo as is the norm in such instances – I wasn’t able get out of the way due to the press of people behind me. So, I took the full brunt of the warm, watery deposit across my legs to such an extent that my jeans became pasted to my legs. Incredibly, given that he was stood right next to me, my friend had somehow managed to escape without a splash. And in spite of my own misfortune I decided not to hold it against him that he subsequently managed to lose me shortly after being ‘swept away by the crowd’.

On the plus side, having quickly dismissed the notion of leaving to get changed, I soon discovered that the combination of looking like I’d pissed my pants and smelling strongly of a heady bouquet of stomach acid and fermented apples meant that wherever I wandered, the crowd melted away around me – affording me both space and excellent views of the stage! Yet still, I somehow found myself unable to quite enjoy the show to the level I’d anticipated and was, in truth, relieved when it was over so that I could go home and get myself cleaned up. 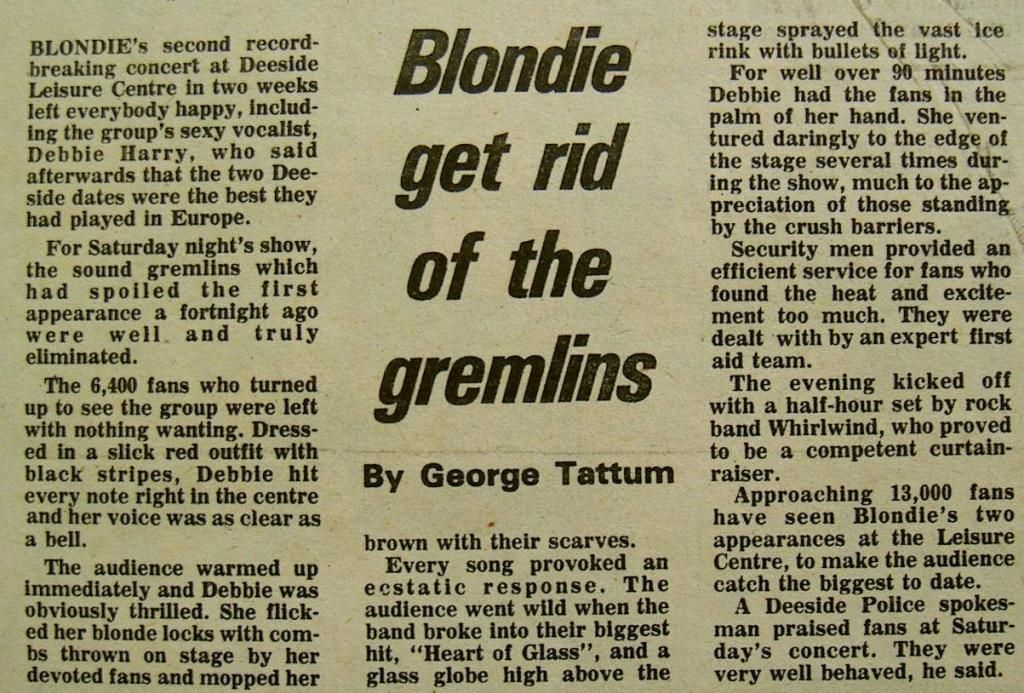