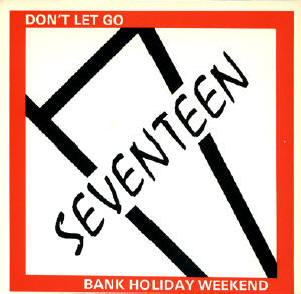 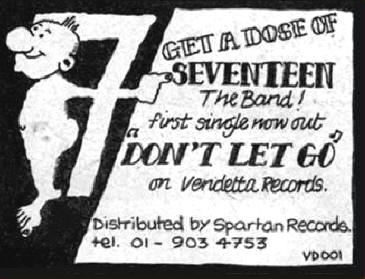 Dave Sharp had formed Chuck Burial and The Embalmed, but was frequently out of the area being both in the merchant navy and college, but this didn’t stop him joining Seventeen as a part time member, appearing live whenever he could. The Chuck Burial project was very short lived and by 1980 Dave had moved his musical morbidity themes onto Screamin’ Demons, inspired by seeing the Stray Cats and had electrified an acoustic guitar.
This was going to be his band just before The Alarm. The plan was a sort of skiffle outfit with Nigel Twist on washboard, and to enable this to occur, Dave “borrowed” Mike Peters’ acoustic guitar. Dave then “customised” the instrument with a pick-up and stickers. (Mike actually played this guitar in the Vic in Prestatyn during the Alarm 20th Anniversary coach tour 09.06.2001).
Dave joined Seventeen full time in 1981, by which time the band had released a single on the Vendetta label Don’t Let Go / Bank Holiday Weekend, they had signed to the label after replying to an advert in the back of the Melody Maker. They also recorded twelve songs with the view to release an album, but this never happened until 2002 when Vinyl Japan put them out as ‘A Flashing Blur of Stripped Down Excitement’, which is a quote from the Melody Maker about a Seventeen gig.

Don’t Let Go is a nippy little pop song and a far cry from the punk brashness that was their previous punk guise, The Toilets. Filled with plenty of harmonised ‘Oh’s’ that would become synonymous with The Alarm’s song writing, a bit cringe-worthy with the key change at the end, but hey, they were only young! The flip side Bank Holiday Weekend perhaps gave away their new Mod leanings as bank holidays were a part of Mod culture, although, this catchy tune was more about being in Rhyl amongst the tourists than fighting on the beaches.

Legend has it that Seventeen publicised themselves by getting arrested for changing the lettering on the local Apollo cinema hoarding to advertise a gig. Although Dave Sharp was keen to play down the folklore and admitted they only had a ‘severe ticking off’ from the police. The publicity also attracted the wrong attention from the local DHSS office who began enquiring as to the band’s income when they were all claiming unemployment benefits. ‘The Dole’ were saying that Mike, Dave, Eddie and Nigel couldn’t play in a band and claim benefits because that would make them unavailable for a job they might be offered. This was quite bizarre considering the country was experiencing its highest unemployment ever! This led to the band being investigated, followed to gigs and ‘aggressively’ interviewed by the local department before being forced to repay some of their dole money back to the DHSS. The case was taken up by the MP Sir Anthony Meyer and earned national press.

After a chance meeting with Kevin Rowland of Dexy’s Midnight Runners, the band thought they got the break they needed when Seventeen landed a tour with the then Mod outfit, but after the opening night the hosts decided Seventeen weren’t good enough to support them. In return Mike Peters got a bit too honest and told Dexy’s he thought they sucked. They were thrown off the tour. Despite this setback, Seventeen played countless shows across the UK, full of self-belief, energy and enthusiasm. The band were known to spray their own name on the walls of every town they played, a feat picked up by an impressionable Ian Brown who caused furor in Manchester when a nascent Stone Roses publicised themselves in a similar manner in the early eighties.

Relentless gigging for Seventeen did not kick down the doors to stardom they craved, from opening with the song Pop Generation at the Bee Hotel in Rhyl on Saturday 27th May 1978 until they played their last song which was either 68 Guns or Breakdown (by The Buzzcocks) in January 1981, at Herne Bay, they were crafting a new sound, a culmination of punk, folk, rock and blues and they needed a change of name as well as the change of direction. Names like Men of Harlech, Uprising, Black Sheep and Drums ‘n’ Guns were thrown into the hat until Eddie recommended Alarm Alarm after The Toilets song. So it was at that final gig in Herne Bay that Seventeen announced to a disinterested audience that they were changing their name to Alarm Alarm. They returned home to Wales and spent six months regrouping.
[taken from the book ‘This Patch Of Land’]