ARCHIVE GIG – The Slits, The Toilets @ The Stables, St Asaph 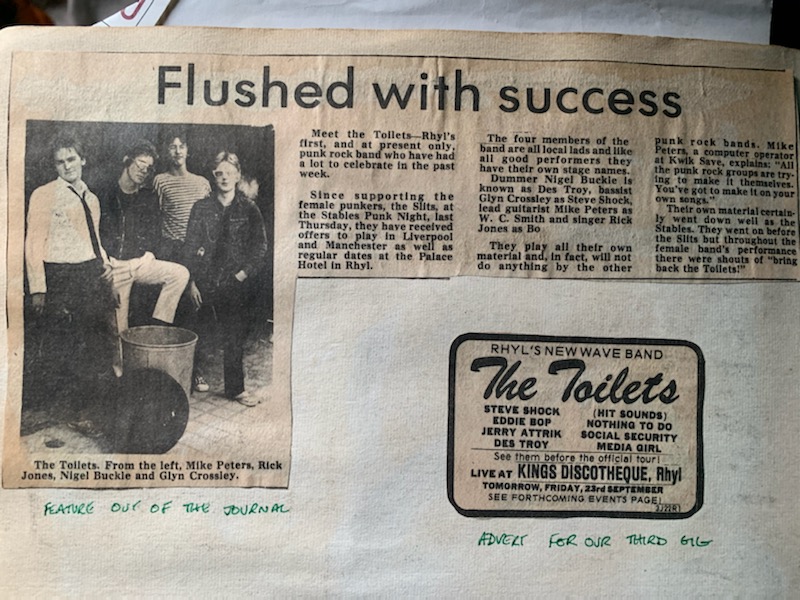 The Slits playing in North Wales is big news; but back in 1977 it barely made the papers. Supporting them was Rhyl’s very own pioneering punk band The Toilets, who featured future members of The Alarm. Of course both bands would go on to achieve legendary and iconic status.
It wasn’t known if this actually happened. Apart from a brief reference on a punk website there is little evidence. This was picked up by Rhys Mwyn, who in turn asked me. Rhys was / is / may have been Viv Albertine’s manager / PA. He asked her if she recalled playing up here and she couldn’t remember.

I asked around and gathered the evidence from Mike Peters (via Gareth Jones) and Steve Rastin….
Here’s what Steve had to say…
‘The gig was in the Stables bar at the side of the Talardy Hotel and the reason I remember the date so well is that the gig was a watershed moment for me in the way I perceived female performers – quite frankly, Ari Up terrified me!!! The band had amazing energy, none more so than Palmolive who was the driving force musically, but they refused to pander to sexual stereotypes in the way that the likes of The Runaways were doing. Spoke to Viv and Palmolive for quite a while at the bar – I seem to remember that Viv was wearing some kind of black leather jacket – and they were genuinely down to earth and approachable. Spoke to Tessa rather more after the gig, but there was no sign of Ari. Saw Don Letts in the Talardy itself before the gig but didn’t see him in the gig itself. Seem to remember it was booked by John Sox.’

The Slits would go on to release the seminal album ‘Cut’ – a post-punk classic – carving a genre of their own.
The Toilets had a very short and explosive career before Mike and Nigel Twist formed Seventeen, who would morph into The Alarm.